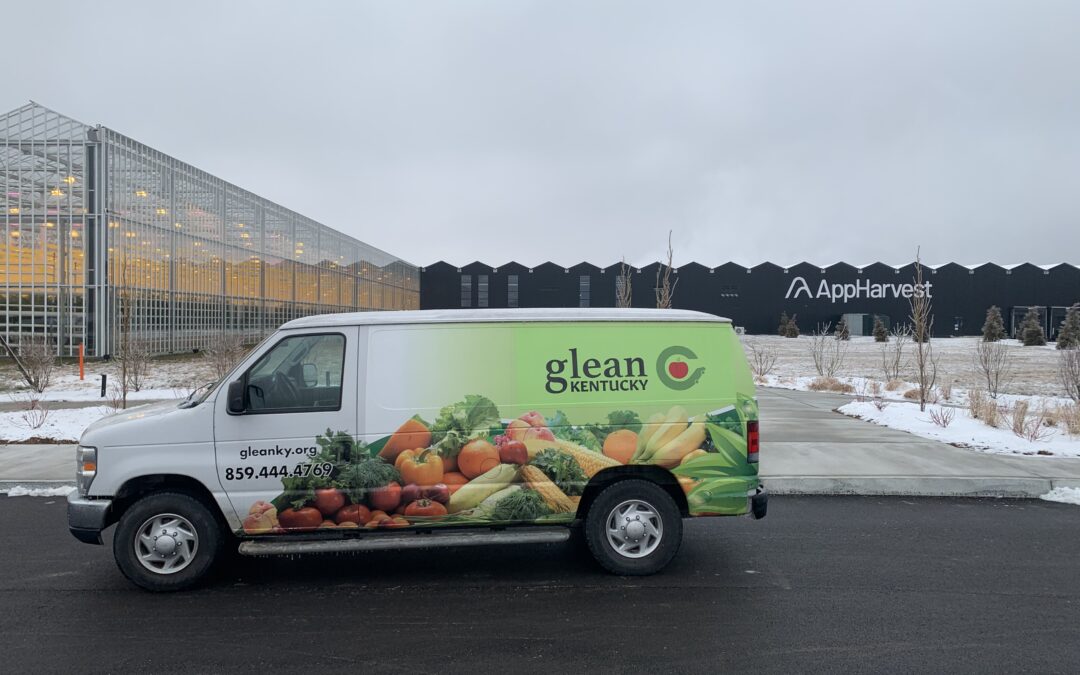 By Friday, February 12, 2021 Central Kentuckians were growing accustomed to the frozen rain coating every outdoor surface. By this point, the roads were mostly clear, but more snow was expected over the weekend and through the next week. That morning, by 10 AM, we received a call from AppHarvest – they had around 1,700 pounds of excess tomatoes in need of a home. Being about six months from our usual tomato gleaning season, we were excited to find a way to get them to our partners.

AppHarvest is a new sixty-acre, indoor growing operation producing tomatoes about fifteen minutes west of downtown Morehead. When I pulled our van onto the grounds of their facility, I quickly realized just how big this sixty-acre ‘greenhouse’ really was. A staff member directed me to make a lengthy drive around back, where we loaded sixty-one 28-pound boxes of tomatoes into the van. While we worked, I asked them how many tomatoes they ship out on a daily basis. They told me they pack a semi truck each day with about 60,000 pounds, but reminded me that they were still working to get about a third of the facility up and running.

Back in Lexington, I met a gleaner at FoodChain, where we unloaded the van and stored the tomatoes on a couple pallets inside. With more bad weather on the way, we knew it would be a while before we could get them out to our partners, many of whom would be shut down until the roads cleared up. The next week, we worked out a list of eleven agencies throughout Lexington who wanted the produce, loaded them back into our vans, and had them delivered within a couple hours. On my route, I had many people comment on what a treat it was to receive such nice looking tomatoes in the middle of February.

Gleaning, just like a lot of other nonprofit work, is a constant exercise in problem solving. And like many of the other problems we solve, this job was made possible by the flexibility of our model, and by the relationships we maintain with our network of great partners. As we continue to grow throughout the state, we’re excited to solve new problems and make new partners wherever we go.