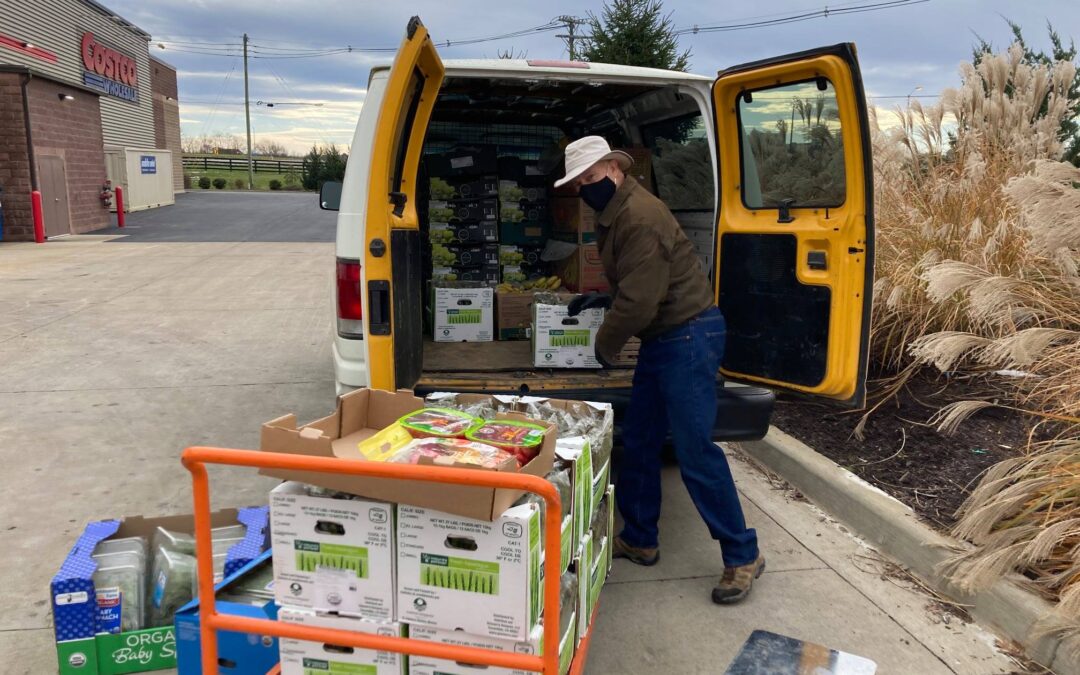 Sadly, we learned two and a half weeks ago through a conversation with Costco Receiving staff, that as a result of decisions made between the Costco corporate office and the Lexington Costco location’s new manager, that Glean Kentucky would likely lose Costco’s produce donations.

Through phone calls with Costco’s Receiving Manager as well as with Executive and Operations level employees at God’s Pantry, we tried to find a way to work with God’s Pantry in order to continue to receive a portion of the produce donation.  However, in the end, we were unable to find a way forward that all parties involved considered tenable.

On the Costco side, this decision was made to improve efficiency in the receiving department.  Specifically, to have all classifications of food donations such as Fresh Produce, Frozen Foods, Dairy Products and Proteins picked up by the same organization, palletized on the same pallets, and perhaps most importantly, scanned out in one action by Costco employees.

I have personally picked up at Costco hundreds of times during my tenure as Fayette County and then Central Kentucky Coordinator with Glean Kentucky.  Our volunteers have put in thousands of hours transporting high volumes of produce from Costco 6-7 days a week since 2013.  Many volunteers made a weekly commitment to be there and have stuck with it for months or years.  The Costco produce donation has amounted to nearly a hundred thousand pounds annually over the last several years.  During the early part of the pandemic, Costco produce was a huge contribution to families experiencing sudden emergency food shortages.

In the last two years alone, Costco has represented forty to fifty percent of our annual produce donations in Fayette County.  We’ve seen this developing and we knew that losing Costco was a real possibility, as it is with any grocer, farm, orchard or other food source.  And now it’s happened.

There is no way to sugarcoat it, there’s not much of a silver lining here.

This is a major blow to our organization and the feeding efforts we work to support.

However, as I was in the process of accepting and getting started in this position with Glean Kentucky, we experienced something similar as Lucky’s Market closed.  My predecessor, Jordan Engle, was on his way to Atlanta, and over what was supposed to be the short training period that Jordan and I had together, we instead had to pick up the pieces from what felt like a catastrophic loss, retool the gleaning calendar and try to find a few food sources to make up for some of the loss.  Glean Kentucky picked up produce at Lucky’s nearly every day of the week, we had a crew of volunteers that were very dedicated to being there and many feeding organizations depended on receiving that produce.

In the end, we found a way through it.  And we will this time as well.  The nature of this work is that it is unpredictable in just about every way and it is constantly in flux.  This particular instance is the only the most extreme example of that.

I am working on reorganizing the gleaning schedule in order to prioritize the organizations that do not have other food sources and make sure that we are getting as much produce as we can to them.  Those organizations that are able are working through God’s Pantry to receive produce.

If you’ve been a volunteer at Costco, thank you for your time and your work.  We urge you to have a look at our calendar and consider plugging in elsewhere.

Perhaps the only bright side here is that we’ll be able to place more of an emphasis on farm gleaning this season and will hopefully be able to develop some new relationships with grocers as well.

Keep an eye on the Fayette County gleaning calendar and on this newsletter moving forward.  We will let you know as we continue to do what we always do: find new ways to progress and continue to fulfill our mission by keeping food waste out of the landfill and getting produce to anyone who needs it.